Now Everyone Can Know Why “Minister of AirAsia” Is Unfit For Office!

YB Anthony Loke popularly known as “Captain Loke” and has since got himself promoted as the “Minister of AirAsia”.  He met and socialised in public with his buddy Tony Fernandes, the Number One man in AirAsia, who was embroiled in the Airbus’ bribery scandal involving payment of RM205 million to AirAsia executive 1 and 2, HERE.

The pattern of conduct that this shameless Minister of AirAsia was involved in interfering with the function of MAHB and MAVCOM by allowing himself to be led by the nose by his buddy Tony Fernandes. Ths pattern of conduct is most disturbing to say the least.

This Minister of AirAsia has shredded the norm whereby he went all out to demean Malaysian Aviation Commission(MAVCOM), which is an organisation set up by the government in 2016 through the MAVCOM Act 2016. MAVCOM was set up primarily to develop our aviation industry into an orderly manner and more importantly to protect the rights of consumers. And yet this shameless minister had on record in October 2019 said “I have disinvited MAVCOM to post cabinet committee of the Ministry of Transport” and “MAVCOM not recognised by anybody”,  HERE.

Yours truly will show the evidence that MAVCOM has been recognised internationally and the latest by the European Commission below.

No other ministers in history including MCA ministers like Chan Kong Choy, Ong Tee Keat and even the spineless Liow Tiong Lai al of whom had not gone as far as this shameless minister to openly condemn a government agency, MAVCOM, without supporting facts.

It must be noted that in 2017, Tony Fernandes had been implicated in the Rolls Royce bribery scandal of about RM13 million, HERE.

On 31 January 2020 AirAsia executives 1 and 2 were caught in the act of having received RM205 million in return for aircraft orders to Airbus. In this case, the Airbus had admitted in court documents that Airbus had paid the said bribe and the UK court had also adjudged the said bribe in its judgment, HERE.

In July/August 2019 Tony Fernandes, went all out to condemn MAVCOM for gazetting the Passenger Service Charge (PSC) at RM73 for international travellers flying out from our airports. Tony Fernandes was campaigning for a reduction of RM23 PSC making it to be RM50. He even went as far as to refuse to implement the gazetted RM73 PSC and asking MAVCOM to reduce it to RM50. AirAsia is the only airline in Malaysia that refused to follow the law.  Of course, MAVCOM and MAHB did not go down on their knees to accommodate Tony Fernandes’ wish and both have stood firm on the RM73 PSC because that is the law.

On 30 August 2019 this shameless “Minister of AirAsia” without consulting MAVCOM and/or MAHB, he unilaterally announced that PSC for international traveller flying out from KLIA 2, which is the airport used by AirAsia, had been reduced to RM50 and that it will be effective on 1 October 2019, HERE.

On the same day (30 August 2019) Tony Fernandes openly defied the gazetted RM73 PSC and announced that AirAsia will launch the RM50 PSC as “Anthony Loke Special” as a mark of honour for the Minister of AirAsia, HERE.

This shameless “Minister of AirAsia” was so ignorant of the law that under section 46 of the MAVCOM Act, only MAVCOM has the sole power to fix and gazette PSC rate and not him, HERE.

1 October 2019 came and gone the PSC reamains at RM73 until this day. No other airline had followed this “Syiok Sendiri” “Minister of AirAsia” except his master, Tony Fernandes.

Of course, this shameless “Minister of AirAsia” was upset and more importantly “Lost Face” so to speak that MAVCOM didn’t carry out his commands / orders to decrease the said PSC to RM50. Hence, this shameless “Minister of AirAsia” went berserk and made all kinds of negative statement against MAVCOM that he had disinvited MAVCOM to post cabinet meeting in MOT and that MAVCOM is not recognised by anyone. What an ignorant sort!

Strictly for the benefit of this shameless Minister of AirAsia, MAVCOM has been recognised all over the world. MAVCOM had been invited to international conferences.  Recently MAVCOM was featured prominently in the Study done on the current level protection of air passenger rights in European Union by Steer, HERE.   Please see pages: 433, 434, 435 & 436 of the said Steer Report, which was published in January 2020.

Steer had even incorporated the full list of the role played by MAVCOM as an example how  air passenger rights have been protected in Malaysia.  We can only hope that this shameless “Minister of AirAsia” will now learn to shut his big mouth and to be thought a fool then to open it and be confirmed a fool without doubt.

Below are the pages where MAVCOM of Malaysia has been incorporated in the said Steer Report of the European Commission which was published in  January 2020. 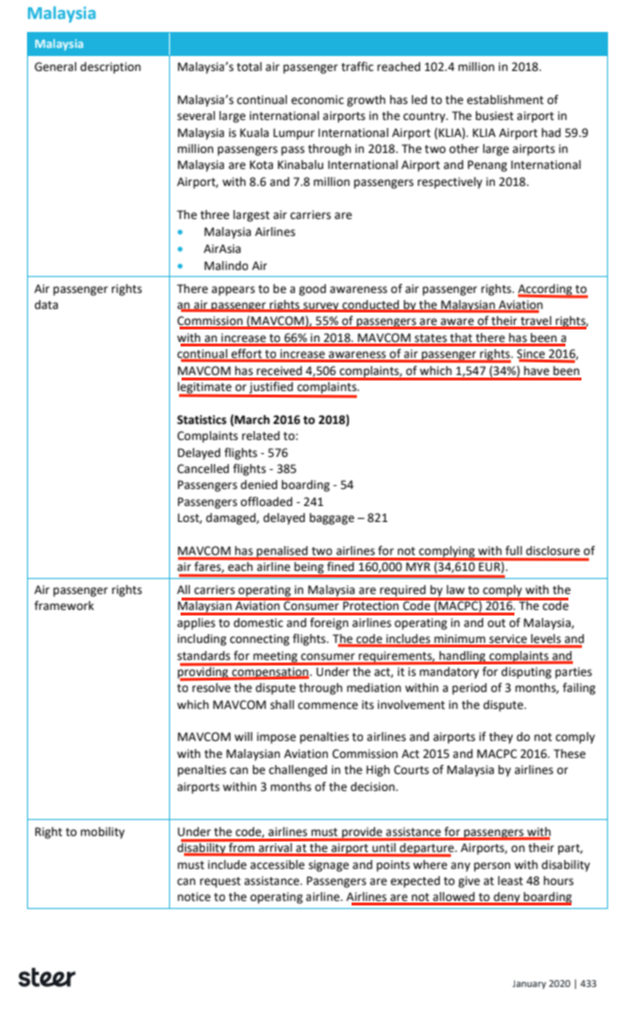 Two months later on 13 December 2019, the cat was finally out of the bag, the rumour of the abolition of MAVCOM finally came true, MOT announced that MAVCOM as a regulatory body to be abolished, HERE.

It was due to MAVCOM’s efforts that in September 2019 AirAsia and AirAsia X were fined RM200,000.00 each  for violating the Malaysian Aviation Consumer Protection Code 2016 (MACPC).  After the implementation of MACPC, both airlines were found for the first time a to be unlawfully charging processing fees for credit / debit card transactions, HERE.

The dateline for AirAsia and AirAsia X to pay the RM2 million fine each on 15 February 2020. Rumour has it that both these powerful airline have not paid the said RM2 million fine. MAVCOM will have to initiate enforcement proceedings in the coming days.

AirAsia and AirAsias X are the only two airlines that charged processing fees for credit / debit cards transactions.

After the two fines imposed against AirAsias and AirAsia X, Minister of AirAsia‘s silence was most deafening.  One would have thought that the minimum a Minister could have done was to reprimand the unscrupulous AirAsia and AirAsia X to abide by the law and stop taking passengers for a ride! But this shameless fella has no time to look after public interest but interest of his favourite airline. Lets hope that the Minister of AirAsia was not too upset with MAVCOM for taking drastic actions against his favourite two airlines. His deafening silence may have been the cause for AirAsia and AirAsia X to carry on to violate MACPC!

Yours truly wonders WHY this fella carries on to behave so shamelessly? May be MACC could shed some light on the matter!

With his above pattern of conducts, this SHAMELESS Captain Loke is unfit for office!