Can Serving Civil Servant Hold Post In A Private Entity?

As on 14 February 2019 Datuk Rashidi Bin Hasbullah (Rashidi), the then KSU of Ministry of Tourism and Cultures (MOTAC), was the Chairman of MyBeauty, HERE.

After the publication of the article, HERE, on 24 February 2019 there were drastic changes made to MyBeauty’s website where Rashidi was no longer designated as MyBeauty’s Chairman, HERE.

Rashidi Is Still the KSU of MOTAC 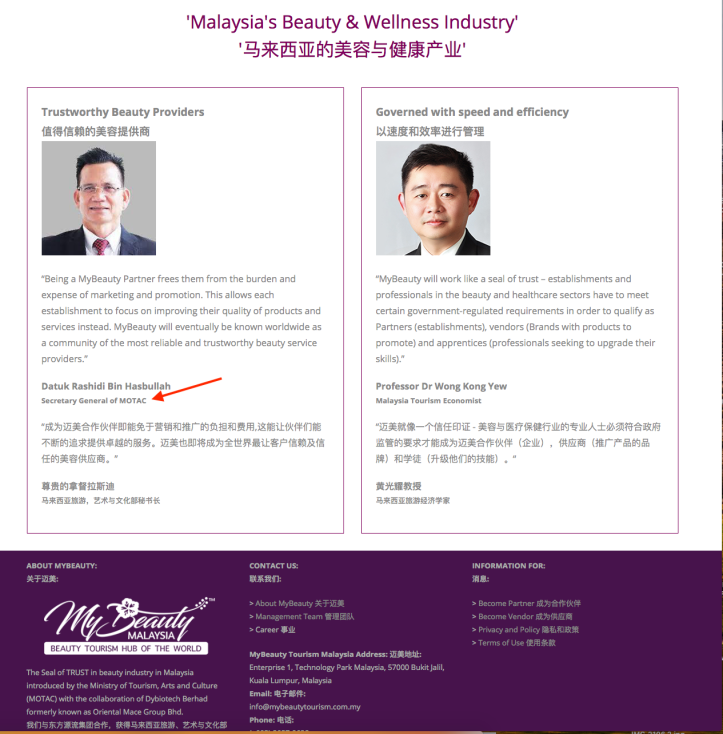 The current KSU of MOTAC, Datuk Isham Bin Ishak, should investigate into the position of Rashdi when he was the then KSU of MOTAC and chairman of MyBeauty at the same time. Whether at that material time Rashidi had violated the rules/regulation set by the government for serving civil servants holding post in a private entity.

As on 14 February 2019, it was stated in MyBeauty’s website that it was established by MOTAC, Tourism Malaysia, Tourism Malaysia (TM), Human Resources Development Fund (HRDF), Oriental Mace and TRIPS (Tourism Research Institute for Policy Studies).

On 24 February 2019 MyBeauty had amended its website as shown above to state that it was established only by MOTAC and a new entity called “Malaysian Beauty College”.

From 13 March 2019 onward the link to Malaysian Beauty College, HERE,  showed that the website had been deleted. Why?

The KSU of MOTAC Should Investigate

MACC and KSN should investigate into Her Excellency Dato’ Haslina Binti Abdul Hamid (the deputy KSU – Tourism)’s trip to Shenzen, China, on 17 January 2019, was sanctioned by MOTAC and who sponsored the trip.