Whose Beauty is “MyBeauty”?

MyBeauty, a pretentious initiative to dazzle Malaysia’s beauty industry, is run by a bogus company that appears to have government endorsement.

MyBeauty claims it is led by public-listed Oriental Mace Group Berhad (OM) but a check with the Companies Commission of Malaysia (SSM) revealed it is not registered. In law, it is non-existent or simply put, bogus.

Seemingly, MyBeauty is a beast preying on government agencies with the blessings of senior officers from the Ministry of Tourism and Culture (MOTAC), Tourism Malaysia (TM) and Human Resources Development Fund Bhd (HRDF)/Ministry of Human Resources.

Even uglier is the MyBeauty website listing of MOTAC secretary-general Datuk Rashidi Hasbullah (Rashidi) as chairman of the so-called beauty tourist platform.

It is awkwardly puzzling that a conceited ‘special entity’ has given the impression that MyBeauty is sanctioned by the government.

According to MyBeauty’s website/Facebook and other advertising materials:

MyBeauty is a National initiative that aims to transform Malaysia into the Beauty Tourism Hub of the World. Its goal is to achieve this through elevating the nation’s Beauty and Healthcare Industry by bringing in 6 million high-yield beauty tourists by the year 2019, qualifying 1,000 MyBeauty Partner establishments, recruiting premium MyBeauty Vendors and Upskilling 50,000 beauty professionals or MyBeauty Apprentices. These Partners, Vendors and Apprentices will be working within proper government rules guidelines and strictly governed by a highly capable Independent Management Team (IMT) led by the Oriental Mace Group Berhad thus assuring beauty tourists world-class quality products and services.”

“The seal of Trust in beauty industry in Malaysia introduced by the Ministry of Tourism and Culture Malaysia (MOTAC) with the collaboration of Oriental Mace Group Berhad (OM).”

Was MyBeauty Established By MOTAC, TM & HRDF/Ministry Of Human Resources?

The website and Facebook declares MyBeauty was “established” by Ministry of Tourism and Culture (MOTAC), TM and HRDF/Ministry of Human Resources.

In every MyBeauty advertising material, website and Facebook, the official logos of MOTAC, Tourism Malaysia and HRDF are prominently featured.

It appears that MyBeauty is a creature of MOTAC, TM and HRDF/Ministry of Human Resources. Is it?

Did the use of the logos of MOTAC, TM and HDRF go through proper channels and get approval before display in public domains?

The Works Of The Little Napoleons

Yours truly believes that this was the doing of a few little napoleons in MOTAC, TM and HDRF because logos of ministries and government agencies have never been used to endorse products or businesses unless they are for government sanctioned programs.

MOTAC KSU Rashidi appears prominently in the MyBeauty website.  He is the chairman of MyBeauty! He indirectly endorses MyBeauty and all its activities wholesale.  It would also appear that no due diligence had been done on the status of the ‘company” known as Oriental Mace Group Berhad.

Rashidi seems unbothered whether it was proper for him as a civil servant to be chairman of MyBeauty. His position will be discussed in more detail in the next posting. 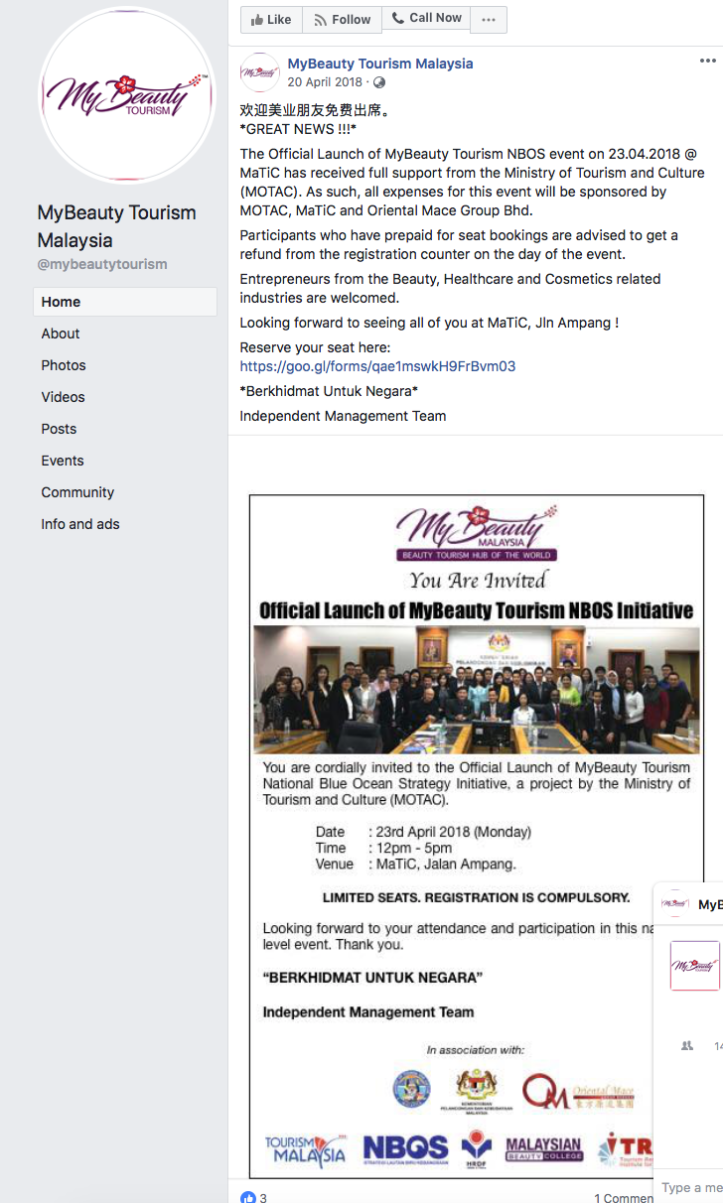 Further, Mybeauty’s officials were given special rights to have its recruitment meetings in the meeting room of several MOTAC state offices (Pahang, Negeri Sembilan, Melaka, Penang and etc.

The expenses for the launching of MyBeauty on 23 April 2018 was paid by MOTAC and Oriental Mace Group Berhad.  YB Minister of MOTAC please take note and investigate. If MYBeauty was not sanctioned by MOTAC then Rashidi personally should be surcharged for what MOTAC had paid out to entertain MyBeauty for that occasion.

MyBeauty co-chairman is Professor of Economics Tourism Dr Wong Kong Yew @ Leong Kong Yew, who has a very impressive background. He is not only a famous professor but a very successful businessman.  Before MyBeauty was set up, he was the CEO of Stone Master Corp Bhd from 2014/2015. Stone Master Corp Bhd is mainly involved in the manufacture and trading of marble, granite, ceramic tiles, sanitary wares and related product HERE.

The World’s Renowned and Distinguished Professors Of Malaysian Hospitality College

According to the website of Malaysia Hospitality College (MHC), amongst the other he is one of the world’s renowned and distinguished professors in MHC. He is a Professor of Tourism Economics, Malaysia Centre for Tourism and Hospitality Education. Please read HERE.

With the “world’s renowned and distinguished professor” in MHC, it is just a question of time before MHC will begin conferring doctorate (Phd) in Tourism and Hospitality.  With such a distinct achievement in high level education in hospitality and tourism, the Ministry of Education should consider allowing its logo to be used in all the advertising materials of MHC as in the case of MyBeauty!

Congratulations to Professor of Tourism Economics Dr Wong Kong Yew @ Leong Kong Yew for your great achievement which no other professor in Asia could surpass. Malaysians should be extremely proud of you as an eminent professor of all seasons.

According to the website of MyBeauty, it is being “led” by a public-listed company known as Oriental Mace Group Berhad. It sounded extremely credible. It became more credible when it was published in the website and advertising materials that it has been established by MOTAC, TM & HRDF/Ministry of Human Resources.

On 23 April, 2018 MyBeauty was launched by none other than the secretary-general of Ministry of Tourism and Culture, Rashidi in the presence of the famous chief executive officer of the Human Resources Development Fund (HRDF), Datuk CM Vignaesvaran a/l Jayandran, Professor – Tourism Economics Dr Wong Kong Yew and other members of the Independent Management Team at Malaysia Tourism Centre (MaTIC). This was such a big news item that TM had to issue a new release on the launch of MyBeauty, HERE.

It must be noted that at that material time, Dato’ Dr Siew Ka Wei was the then Chairman of TM. He is also the executive Chairman/CEO of public listed companies Ancom Bhd and CEO of Nylex Bhd.

On 9 January 2019 Dato’ Dr Siew Ka Wei and Ms  Elizabeth Ken were arrested by MACC and remanded by the court order for four days to assist MACC in its investigation into the dubious “Speedy Gonzales” Geeko deal worth RM99.693 million, HERE.

On 4 April 2018 the dubious ‘Speedy Gonzales” Geeko deal was sealed. On 23 April 2018 MyBeauty was launched with logo of TM prominently featured.

Perhaps Dato’ Dr Siew Ka Wei, as the then chairman of TM, should clarify whether he was aware or had a hand in allowing the TM’s logo to be used to endorse MyBeauty when it was launched on 23 April 2018.

It must be noted that HDRF/Pembangunan Sumber Manusia Bhd is an agency under Ministry of Human Resources Malaysia.

In June 2018, a scandal erupted over a project involving the Human Resources Development Fund (HRDF) whose CEO then was Datuk CM Vignaesvaran a/l Jayandran.  He tendered his resignation on 12 June 2018. HERE.

According to the HRDF website, Vignaesvaran was no longer the CEO, HERE.  However, up to this date the MyBeauty website still shows that it has been established by HRDF/Ministry of Human Resources, HERE.

With the undivided support of Rashidi, TM and Datuk CM Vignaesvaran a/l jayandran the so-called “Beauty Tourism Hub of The World” was officially launched at MaTIC, on 23 April 2018.  It was a publicity blitz for MyBeauty.  Bernama quoted 1,000 Beauty Partners to receive RM50,000 MyBeauty matching grant, HERE.

Rumour has it that MyBeauty had applied for a grant from MOTAC and the status of which is not known.

MyBeauty Has Been Well Supported By The Two Top MOTAC Officials

Rashidi wasn’t the only top official supportive of MyBeauty. His deputy Secretary General, Dato’ Haslina Abdul Hamid (Haslina) is equally supportive of it too. 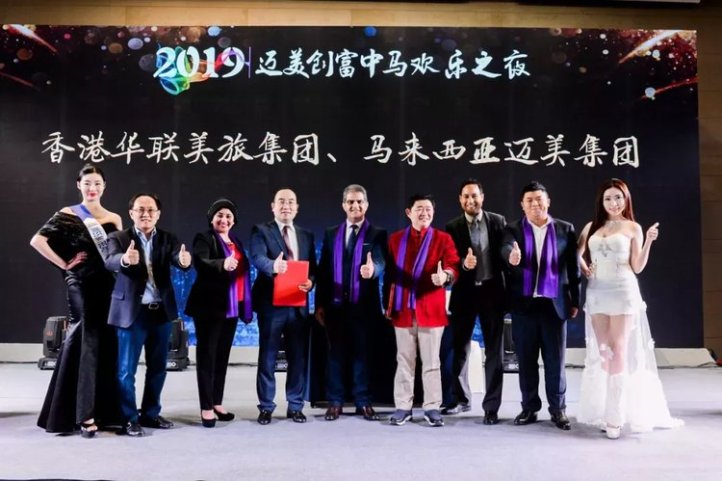 On 17 January 2019, which was on a Thursday (a working day), Haslina attended a function, which was associated with MyBeauty, in Shenzen in China. She was addressed as ‘Your Excellency” and given a red carpet treatment at the so-called “2019 Maimei Create Wealth China – Malaysia Friendship Exchange Conference”. “Maimei” is the Mandarin translation of MyBeauty.

Did Her Excellency Dato’ Haslina take leave to attend the said conference in Shenzen? Even if she did, it was still improper for her to attend such conference as the Deputy Secretary General of MOTAC and to be a witness of signing ceremony and etc.  it would appear from the above pictures that Her Excellency Dato Haslina’s attendance gave a clear endorsement of MyBeauty!

Can high ranking government officers be actively involved in a private entity like MyBeauty?

In view of this disclosure involving a non-existence company, Oriental Mace Group Berhad, and top government officers, the Minister of MOTAC, Minister of Human Resources and MACC should investigate the above matters.