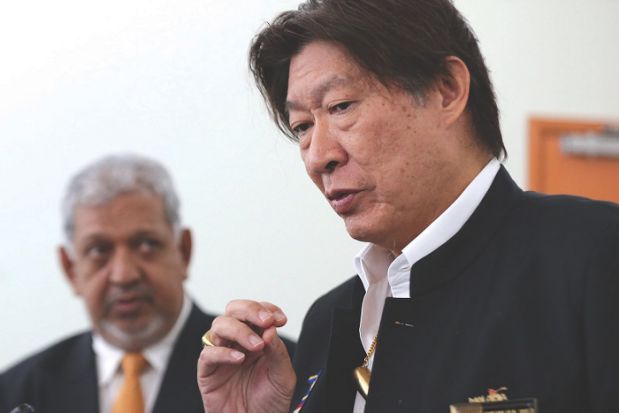 Yg Bhg Dato’ Siew Ka Wei  (“Dato’ Siew”) is the super powerful executive chairman of Ancom Bhd (Ancom), HERE.  We know Ancom is one of the most profitable public listed companies in Malaysia! Under Ancom there are several whole-owned subsidiaries namely Redberry Sdn Bhd (Redberry is a media & Communication Group), Meru Utama Sdn Bhd,  Focus Media Network Sdn Bhd (Focus Meida) and etc. Malay Mail is one of Redberry’s outfits.  Dato” Siew was flying very high in the corporate world as well as in BN until the General Elections of 9 May!

In the posting HERE, yours truly had shown how the “Speedy Gonzales” Geeko Tech Sdn Bhd (“GEEKO”) was sealed in one day on 4 April 2018.  It is safe to say that a deal of RM99.693 million could never be evaluated, negotiated and sealed in one day whether in the private or public sector.  It is normal for a company to take weeks just to carry out due diligent before formal negotiations could be put in motion and thereafter agreements to be exchanged between lawyers from both sides. The preparations and exchange of contracts itself will normally take a few days if not  weeks for a contract of this size to be concluded.

For contracts involving the government agencies like TM, more time will be taken because of the stringent Regulations and Rules will have to be followed before exchange of contract.  It is unheard of a contract worth RM99.693 million in value was evaluated, negotiated, signed and sealed within one day.  Surely, it will be extremely hard if not impossible to have the due diligent done within a day. The preparation of contract itself will take days unless both are of one mid set from the start!

Let me remind Dato’ Siew again that up to this date yours truly had NOT touched on Tencent Holdings’ so-called agreement yet.  Please don’t distract yourself with the frivolous Tencent Holdings agreement in an attempt to paint a false picture of the GEEKO “Speedy Gonzales” Contract so as to confuse members of the public .  Please be assured that your press release will be dealt with in details in a separate posting.

Thank You Dato’ Siew For Responding

However, yours truly would like to thank Dato’ Siew, the chairman of TM, for his press release on 1 June 2018 in an attempt to debunk what yours truly had published HERE & HERE & HERE. It would appear that the said press release instead of answering the allegations it raises more questions.  It seems that Dato’ Siew was in great pain to avoid the addressing the real hard issues in the said “Speedy Gonzales” Deal.

Please be assured that yours truly shall deal with the said press release in details in the next posting.

Dato’ Siew, Datuk Mirza and his little napoleons in TM To Declare Their Stand

Yours truly takes it as a kind gesture from Datuk Siew and TM that they were serious in upholding their integrity by responding to the allegations in the said postings.  In the premises, may yours truly invite Dato’ Siew, Datuk Seri Mirza and the management team of TM to formally declare to the rakyat that:

As the executive Chairman of Ancom, Dato’ Siew should be very familiar with good governance whereby Ancom will not entertain deals that does not conform with Government Regulations or its own policies and rules and/or tainted with direct or indirect conflict of interest of its management staff.  As the Chairman of Tourism Malaysia (TM), Datuk Siew,  knew or ought to have known that the above principles applied more stringently, in TM because Rakyat money is involved.

It is usually the first step for officers in government department t or agencies when appointing companies for certain project or negotiating with companies with the view to enter into a contract will ask for the company concerned to produced its MOF Registration Certificate from as a first step low its due diligent exercise.

Therefore, based on the above normal procedure,  Dato’ Siew knew or ought to have known that on or before 6 April 2018 GEEKO was not registered with Ministry of Finance (“MOF”).

But in this case,  TM saw it fits to ignore the said Procurement Regulation of MOF, which is a condition precedent in such a transaction.  TM under the leadership of Dato’ Siew and Datuk Seri Mirza had rushed through the “Speedy Gonzales” GEEKO deal in one day on 4 April 2018.  Please see the Certificate of Registration dated 6 April 2018 above, which was two days after the GEEKO’s deal was sealed.

On 4 April 2018 Dato’ Siew and/or Datuk Seri Mirza knew or ought to have known that GEEKO was not registered with MOF and under such circumstances both of them should have rejected the “Speedy Gonzales” GEEKO’s deal outright but both of them seemed to have condoned it. WHY?

Therefore, all acts done by TM prior to 6 April 2018, were in breach of the Procurement Regulation PK 7.15.  Therefore, it follows suit that the payment of RM11,693,160.00 and RM1.3 million that was approved and paid out using the rakyat money in total disregards of the said Regulation was most improper. After the investigations by the authorities, the little napoleons responsible for this “Speedy Gonzales” Geeko Deal should be surcharged under the General Orders and pay for the damage suffered by TM.

Under the circumstances, both Datuk Siew and Datuk Seri Mirza are duty bound to explain to the rakyat whether TM will now officially lodge a report with the Ministry of Tourism and Culture, MOF, Auditor-General and MACC with regards to TM’s willful blindness in violating the said Procurement Regulation PK 7.15 (2.1.2).  If not, why not?

From the above company search obtained from SSM shows that KOPEMA holds 10,000 shares in GEEKO.

The three of the abovenamed are also in the management team of TM, HERE.  Is this not a of glaring conflict of interest whereby TM’s management team is part of the GEEKO’s outfit???

Just to digress a little.

Yours truly has been informed that Datuk Musa bin Yusop works very closely with Dato’ Siew.  So is his deputy En Hairi Mohd Yakzan.   Rumour has it that soon Datuk Musa Yusop will be promoted to Jusa C and B at par with the other little napoleons.

Yours truly has been reliably informed that Up this date KOPEMA is still owing the Ministry of Tourism and Culture a sum of RM20,000.OO for rental of cafeteria and kindergarten. This debt has been outstanding for years.  It seems that the Ministry is not taking serious actions about this outstanding debt.  It is strange that the Ministry has been allowing this debt to accumulate for years. This is another case of “Harapkan pagar, pagar makan paid“!  This may appear to be a small sum but it may lead MACC and/or Auditor-General to find bigger things. Yours truly calls upon the Auditor-General and MACC to look into all the matters stated above.