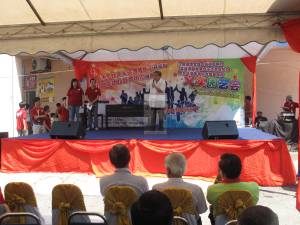 I would like to express my appreciation to Pastor Lau, the head of the MuKEn Methodist Church in Setapak, for inviting me to attend the opening ceremony of the said church’s service centre and its fund raising  carnival for a few Chinese schools in the Setapak area.  The theme of the day is: “To Live, To Love. We Live To Serve.” Pastor Lau spoke about his concerns of the mushrooming of cyber cafes in Wangsa Maju which is detrimental to the developments of our youth.

I fully agree with Pastor Lau’s concerns. In fact, I have brought up to the attention of the DBKL with regards to the operations of cyber cafe with no or little control. I have officially informed DBKL that some of the cyber cafes are operating until 6 am and quite a number of them are actually gambling dens.  Furhter, school children with school uniform are allowed to patronise some of the cyber cafes. I have called upon DBKL to withdraw their premise licence if they were caught with allowing school children to patronise, gambling and operating after 12 mid-night. The excuse I received from DBKL was that there is no law for DBKl to take actions against the cyber cafes. I was officially informed that DBKL ‘s Legal Deparetment has completed the Cyber Cafe Regulations and were supposed to be in operation in March, 2009.  Unfortunately, until this day we have not seen such regulations have been proposed let alone passed. This is one of the glaring evidence of the empty slogan of “People First”.

During my speech today, I have promised to bring this issue for discussion during the debate in the  Committee Stage of the Budget Debate in Parliament within hte next two weeks.   I have also promised to assist the residents in Danau Kota to move out the Danau Kota Uptown Pasar Malam from Danau Kota to another place far away from residential area.