Speech at the UN on International Trade Law

STATEMENT BY
THE HONOURABLE MR WEE CHOO KEONG,
MEMBER OF PARLIAMENT AND REPRESENTATIVE OF MALAYSIA

ON AGENDA ITEM 79:
REPORT OF THE UNITED NATIONS COMMISSION
ON INTERNATIONAL TRADE LAW

ON THE WORK OF ITS 42ND SESSION AT THE 6TH COMMITTEE,
UNITED NATIONS GENERAL ASSEMBLY, NEW YORK, USA
13 OCTOBER 2009 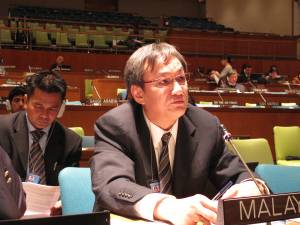 On behalf of the Malaysia’s delegation, I would like to take this opportunity to congratulate you and all other members of the Bureau on your election and to also thank the Mr Soo-Guen Oh, the Chairman of United Nations Commission On International Trade Law, for his report.

Malaysia as a member and an active participant in Working Group II (Arbitration and Conciliation) stands by the general agreement of the Commission that the mandate of the Working Group to maintain the original structure and spirit of the 1976 UNICTRAL Arbitration Rules and reference to the UNCITRAL Model Law on International Commercial Arbitration with amendments as adopted in 2006 should be the guiding principle for its work and that any departure should be carefully considered.

In this regard, Malaysia would like to further reiterate an important principle that has been agreed upon and practiced widely by Member States that, in the event of a conflict between the rules and a provision of the domestic law applicable to the arbitration, the latter should prevail. Pursuant thereto, the revised Rules should take this issue into consideration and in particular when it relates to issues pertaining to the rights of parties, the power of the arbitrator, awards and interim measures and the inherent powers of the domestic courts to apply and adjudge matters pertaining to the said rules.

Further, although reference to other established arbitration rules or particular related legislation would be a useful guide to the Working Group, it is to be noted that the form of the revised rules should not be dependent merely on those said rules or legislation. One of the important criteria of the UNCITRAL Arbitration Rules is due to the nature of the rules that takes a less rigid and universal form that is widely accepted by parties.

In finding an acceptable solution to ensure progress is made on the issues as stated previously, the working methods of the Working Group should take into account the views of the members of the Working Group. In this regard, Malaysia takes the view that every effort in retaining the original structure and spirit of the 1976 Rules as agreed to previously by the Commission must be maintained.

Malaysia is also supportive that the Working Group will be considering issues pertaining to the topic of arbitrability, online dispute resolution, implications of electronic communications, investor-state dispute settlement in the future to attain the goal of modernising and promoting greater efficiency in arbitral proceedings.

Malaysia, taking from its experience in its participation in the deliberations and noting the complexities and high standards and quality expected from the draft text of the revised rules, further support the need for sufficient time to be provided to the Working Group to complete its work.

With regard to security interests in intellectual property, Malaysia acknowledges that the complexities of formalistic rules on security transactions relating to intellectual property adds significantly to transaction costs and lacks responsiveness to modern commercial and financial requirements. Due to this, Malaysia is supportive of the efforts of Working Group VI (Security Interests) and hopes that the Annex to the Legislative Guide on Secured Transactions would help in tackling these issues. Regarding the future work of Working Group VI, Malaysia notes the proposal to develop a Contractual Guide to Intellectual Property Licensing. Such a Guide would address key issues relating to intellectual property. However, we would like to place on record our concern if such a project would duplicate the work in the World Intellectual Property Organisation which is also actively engaged in this area.

With respect to e-commerce, we note that the 41ST UNCITRAL Commission had agreed that that it would be worthwhile to study the legal aspects involved in implementing a cross-border single window. At the ASEAN level, Malaysia has been actively involved in the deliberations of legal issues relating to the implementation of the ASEAN Single Window. Hence, it is hoped that the experience and challenges faced by ASEAN may contribute to the study.

Malaysia is aware that the UNCITRAL Commission is currently deliberating on UNCITRAL Rules of Procedure and Methods of Work (hereinafter referred to as “Draft Procedures”), which is intended to clarify the existing work methods that are currently being used in UNCITRAL. In this regard, Malaysia views that maintaining the consensus approach would enable larger cooperation among Members having different legal, economic and social systems and ensures that the uniform rules derived from the work of the Commission are generally acceptable and not only approved by a small majority.

Note: There were 21 speakers speaking on the subject. They were from Austria, Norway (on behalf of Nordic countries), Switzerland, Australia, Belarus, The People’s Republic of China, Indonesia, Singapore, Malaysia, The Republic of Korea, United State of America, Thailand, Cameron, Canada, France, Russia, Japan, Greece, Venezuela, Pakistan and Islamic Republic of Iran.